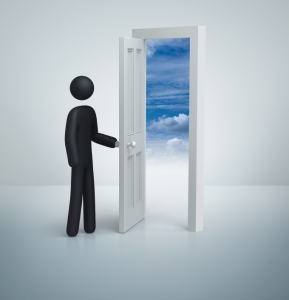 Last week’s post addressed individuals “just leaving” before having a clear picture of where they were going. When I began to write it, I thought that I had to focus the post on individuals since organizations don’t just leave. But, in their own way, they actually do. After all, “just leaving” is in the eye of the beholder.

While it may be an oversimplification, organizations are collections of people working together to deliver products or services; many, though not all, do so within the context of a broader vision and mission. Their products and/or services are delivered to specific markets.

Through this lens, an organization may choose to leave its people, its markets, one or more of its product/service lines, or even its vision and mission.

In early October 2003 an American airstrike hit a hospital in Kunduz, Afghanistan. Dozens of people were killed and injured, including several medical personnel serving on behalf of Doctors Without Borders. Reluctantly, the organization withdrew from Kunduz, leaving the war torn region grossly underserved. Sometimes, organizations–like individuals–find themselves in untenable situations that require an immediate retreat.

However, sometimes organizations “just leave” for economic reasons, and they do so in ways that create significant hardship for their people and the communities they are leaving. Factories are shuttered; storefronts are boarded up; offices are vacated. Jobs are eliminated, or are moved elsewhere. All too often, the announcements and the actions come after considerable analysis and planning in headquarters, but with little or no forewarning for those who will be affected. Generally, the law is obeyed, union contracts–if they exist–are complied with, personnel policies are adhered to. But the leaving is experienced as a negative failure at the local level. “They just left.”

There are times when organizations leave their product/service offerings. As a sometime photographer I experienced this first-hand about a decade ago. I used to shoot Scala, a black and white slide film, with my Minolta pro camera. In one year, Agfa, which manufactured Scala, went out of business, and Minolta merged with Konica; they left the field of photography altogether to focus on office products. Their leaving was understandable. Quite simply, digital photography was replacing film at all levels of the market; the industry was being shaken up from all directions.

I cannot speak to the experience of the employees when these two corporate departures took place; I can speak to the consumer experience. Initially I saw this as a negative change. I preferred film to digital, which does not capture black and  white the same way. I had thousands of dollars of lenses suitable for Minolta–but not other–camera bodies. (For those unfamiliar with photography, different manufacturers use different lens mounts, making it difficult, and expensive, to switch brands.) Yet, while the transition was uncomfortable, it proved to be manageable.

Scala film required special processing; there were perhaps a half-dozen labs in the country that developed it at the time. One by one they closed down their Scala darkrooms as the demand faded; as late as this spring there was still one available for those still shooting with the film.

If your organization is planning to leave product/service lines, pay attention to the customer experience. Communicate with them; if possible, offer them paths to successfully transition to other ways of accomplishing what your products/services were providing to them. Leave, but don’t abandon your customers in the process.

Leaving your mission or vision is particularly challenging; beyond the products and services, these are what tie the organization to its employees and its external stakeholders.

Sometimes, the leaving is due to the vision having been fulfilled. As one example, some nonprofits whose mission was to achieve marriage equality have now closed their doors. Others have reframed their vision and mission to a broader equality perspective. In the former case, acknowledge those who have supported your pursuit of the mission, and do everything that you can to assist your employees in transitioning to other employment.

Whether you are a nonprofit or for profit, when the vision and/or mission change, it is important to acknowledge those who have supported you from outside, whatever that relationship might have been. Some may stay, while others may leave; they all warrant recognition. The same will be true of employees. When the organization’s purpose for being shifts, not everyone inside of it will want to remain. Once again, how you respond as an organization will say a great deal to them, as well as to others. Don’t demonize those who elect to not take the change journey; honor them for what the have given in the past, and support them in making their own changes in employment.

Sometimes organizations leave because their current paradigm is no longer serving their customers, their shareholders, and/or their employees. The following paraphrases the announcement of a large commercial bank that was shifting its paradigm; this was how they told their rank-and-file employees.

They began by stating the case for change. They then want on to say this.

We are closing the old commercial bank; we are opening a new one. It will be very different, as described earlier. As an employee of the old bank, you are invited to apply for a position at the new bank. We know that no one is fully qualified for these positions. For that reason, we are providing you with position descriptions, skills requirements, and professional development worksheets. When you interview for your new position, please be prepared to discuss your worksheet with the interviewer. That will allow us to know what we need to do to help you be successful in your new position.

I love to tell this story because it says so much about what it means to “do it right” when your organization is leaving in any way. It acknowledges the significance of the change. The case for change provided clear answers to questions such as “Why?” and “Why now?” By “closing the bank,” individual employees regained control of their future; they could make the decision as to whether they would leave or stay (apply for a position in the new bank), rather than waiting to see if they would be retained or terminated. It does not try to make people comfortable about the change; that would be disingenuous. Instead, it shows a strong commitment to helping people succeed despite their discomfort.

Finally, there is the story of a large technology-based company that was being acquired by another giant in its industry. As is the norm with major mergers and acquisitions, there is a significant time lag between announcement and closing (or not) of the deal while it undergoes regulatory review. During this time it is not unusual for the company being acquired to experience significant drops in productivity and quality as employees across the organization wonder about their future. Those who are most capable of transitioning to new jobs elsewhere will often do so, leaving the organization weaker in its ability to transition into the acquiring company.

In this case, the company being acquired did something different. They made use of the time to strengthen their internal ability to address change, a capability that would serve them well whether or not the deal was eventually completed. They put more than 1,000 of their most senior managers through a one-day workshop on leading during times of uncertainty. As a result, the company was able to sustain its performance levels, despite the discomfort that employees were experiencing.

Organizations do leave. When the do, unless the circumstances are unexpectedly dire, they should leave successfully. To leave successfully calls for looking at the human impact, not just the bottom line, and carefully considering that impact across stakeholder groups, as well as the organizational brand. It warrants finding ways to engage those affected so that they are able to regain a sense of control over their own fates. And–when possible–it is worth investing in preparing people for the inevitable disruption that they will experience with the change.

Have you experienced an organization leaving? Share it below.

The coronavirus pandemic is not something any of us is prepared for. During periods of highly disruptive change, it is important to pay attention to your anchors, those things that provide you with a sense of stability and security from day-to-day. And, it is necessary to make adjustments to them; chances are, many have been greatly disrupted if not torn away. I am offering pro bono webinars to introduce you to the personal anchors process and to give you the tools you need to begin your anchors work. For more information on the webinars, including dates, times, and registration, go here.

What if we taught children how to more easily and successfully move through the disruptive changes in their lives? Join me on the journey as I pursue this idea and bring it to life!

"Dear Brian, once again I want to thank you for your insightful and compassionate support during our coaching program together.  I celebrate the new … END_OF_DOCUMENT_TOKEN_TO_BE_REPLACED